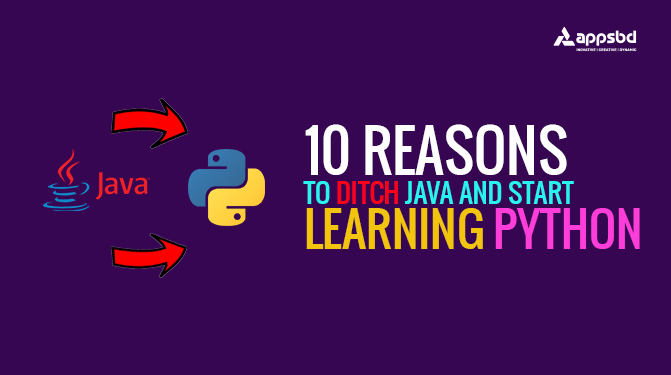 In this modern world, the technologies have shifted drastically! Some languages and technologies have seen downfall over the period of time, whereas some of them have broken the bars! Python is one of those languages that is at its peek and does not seem to stop in this race in the near future.

Python is that rabbit, that is fast and furious. “Slow and steady”- is not the principle that one follows in this ever changing modern world. While Java still stands tall, Python and Java seem to be the hottest trends and technologies in the current market. I am going to give you 10 reasons why you should ditch Java right away and learn Python!

Before starting let me take you to a quick revision of Python and Java are :

Is this a snake we are talking about? Of Course not!
In 2020, surely I don’t need to tell you what Python is, right?
Python is a simple, open-source, interpreted, object-oriented and high level programming language.

Java is like that topper of your school that always gives you a tough fight.
Java is an object-oriented, platform independent programming language with a huge use case in the enterprise world.

Let’s give you 10 reasons to start with Python today and ditch Java. If your heart is biased towards Java, then my dear friend, let me tell you, It will be tough for you to know these reasons.

Reason 1 : The unbelievable growth over the past years

As a human, we believe in one word called “Stats”. Whenever someone tries to convince you over something, the first thing we say is “Show me the stats!”. So let us go through some stats.
Stats 1 : The Google Trends

As you can see in the above image, over the past years, Java has degraded while Python has seen drastic growth.

TIOBE programming community index is a measure of popularity of programming languages, created and maintained by the TIOBE Company. And this also says the same story. 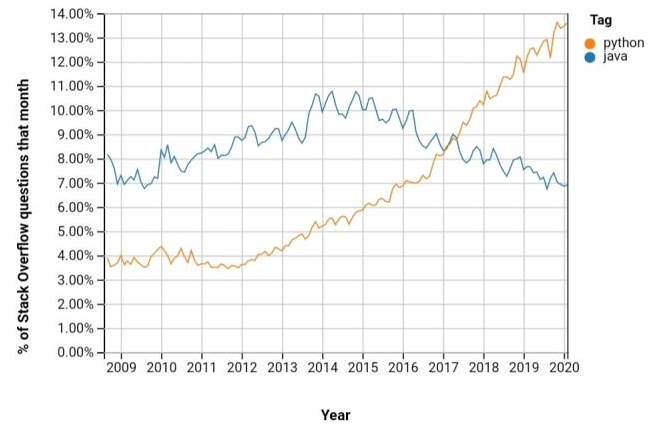 When it comes to programming, the next thing that comes to our mind is our stress reliever and problem solver, Stack Overflow. When we compare Java and Python on the stack overflow trends, it shows that Python is more active and used in the community based on the interactivity.

Moral of the Story, Python is drastically growing and is ranked among the Top 3 languages by the industry giants.

As a programmer, one thing that comes to our mind is the number of lines of code that we have to write. Some people might call us lazy, but we become extremely happy when our purpose is served with lesser lines of code.
Let us take a simple example of the legendary “Hello World” program.

Pheww! That’s a lot of work to print a simple Hello World.5 lines of code! Why would one want to do that…

And we are done! Just one line of code to get the work done.
Thus, let it be any kind of problem or a program, your mate Python will make sure that you write less lines of code.

Yes, Python is dynamically typed. What does that mean?
It means you don’t need to determine variable types as the checks are done at runtime by the interpreter. Thus, this makes Python more “English like” language and in return ensures more code readability and simplicity.
Whereas Java has strict syntax being statically-typed, one needs to declare variables explicitly. This makes things complicated for the developers and especially the beginners.

Reason 4 : Indentation and No Semicolons!

If you have worked on Java, you cannot forget the days when you write a very complex code and compile it. You are excited for the output and what you get is an ERROR! And most probably this error is “Missing semicolon” or “A missing bracket”.

Yes, in Java every line of code is terminated with a semicolon and blocks of codes are created using curly braces({}). And this sometimes kicks your head and your programs with Errors.
Here, you mate Python comes into action. No semicolon! Yes, you read it right. Python does not have a concept of a semicolon. Block of codes are important, and Python takes care of that as well. It uses indentation rather than curly braces.

Now that you have seen good enough reasons, the question might arise in your mind : Which one is easier to learn?
Java or Python. It’s like choosing between Top 2 restaurants to eat in your city.
Both are object oriented, But at the same time you as a beginner want to get comfortable in this computer science field. And Python can do that for you! Choosing Java as a beginner can turn into a nightmare if you don’t get a proper tutor.

Whereas Python is a beginner friendly language with a very easy learning curve.
Python provides a more English like feel that can make anyone comfortable and learn programming. It’s syntax, code readability, lesser lines of code, etc are add on features that make Python an easy to learn language. It takes a load off coders by taking care of a lot of the language’s complexity. While Java still holds the power and has its benefits and it can do wonders for experienced coders, Python can be a perfect choice for beginners and give you more enjoyable coding experience

So what’s stopping you from getting your hands on Python?

Yes, Python supports Object oriented paradigm like many other languages out there.But it offers something more : The power of scripting!
What is a scripting language?

In simple terms, a scripting language is a language that allows you to write scripts!
Rather it be over the web or some automation or some hacking stuff that you are already excited about!

So with Python it’s like, asking for one thing and getting a bonus treat with it.
Whereas Java is a strict Object oriented programming language.
What would you go for? An ice cream with a single flavour or an ice cream with some flavors and added choco chips? I would surely go with the other one!

Python is slower and Java is Faster, you might have heard that, But my question to you is, Is it?
It’s not your fault that you think Python is slower, it’s the talks in the community that brought these things in your ears.
I don’t disagree that it isn’t slow, but can it affect you?

Let me give you a simple example: A code with a time complexity of Big O(n^2), will have the same complexity in Java and in Python as well. What my point is, If Python was that much slow, then could it get the popularity and the acceptance by the community? Well that has answered the question.
Thus, Python might be slower than some other languages, but it won’t affect you!
It’s a myth.

You know what is Python called?
A general purpose programming language – That means it has its use cases in most of the areas that you might be thinking of, to make your career in!
There are many use cases, But I will list the most prominent ones,

The list is huge!
Now, let’s talk about applications of Java,

This itself gives us the idea which one is the clear winner! Surely, there are more applications in both, and in some areas we can’t even replace them. But at a larger picture, Python is your friend that has many paths to offer.

Ofcourse, this point is something you can’t skip. Because you gotta pay your girlfriends bill, right? Jokes apart, but Python is something that you can call as a money maker. Rather it be a Job or any freelance role, it is surely gonna fill your pockets.
Python offers an average salary of $110,000 and it is not a number that you would like to ignore. Salary for freshers is also way higher than that of a Java fresher.
You decide, who’s gonna pay you bills? Python or Java

Thus to conclude, I would like to say Python is the language of the future and you should put your hands on it right away. Hope this didn’t hurt any Java Developers sentiment, I just wanted to make a point that it’s the perfect time to ditch Java and start learning Python today.

Contents hide
1 What is Python?
2 What is Java?
3 Reason 1 : The unbelievable growth over the past years
4 Reason 2 : Less number of lines
5 Reason 3 : Dynamically Typed
6 Reason 4 : Indentation and No Semicolons!
7 Reason 5 : Ease of Learning
8 Reason 6 : Object Oriented but also a scripting language
9 Reason 7 : Python is slow – A myth
10 Reason 8 : Wide range of Applications
11 Reason 9 : Ocean of Opportunities.
12 Reason 10 : The Money Maker