SQL injection is one of the most dangerous vulnerabilities for online applications. This happens when a user adds untrusted data to a database query. For example, when filling out a web form. If SQL injection is possible, intelligent attackers can create a user input to steal valuable data, bypass authentication, or corrupt your database records.

There are different types of SQL injection attacks, but in general they all have a similar cause. The untrusted data that the user enters is combined with the query string. Therefore, the user’s input may change the original intent of the query.

Some SQL injection examples are:

In this cheatsheet, I will address some best practices that every application programmer can use to prevent SQL injection attacks. So let’s get started to make your application SQLi proof. 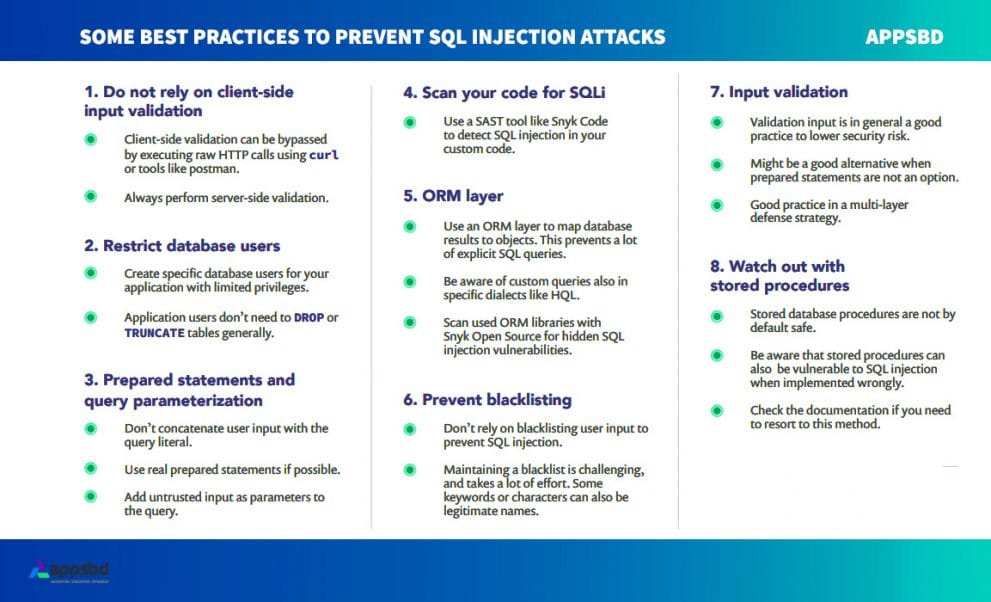 1. Do not rely on client-side input validation.

The validation of Client-side entries is excellent. With client-side input validation, you can already prevent invalid information from being sent to the logic of your system. Unfortunately, however, this only works for users who do not have bad intentions and want to use the system as intended. Giving the user a direct feedback on the fact that a particular value is not valid is very useful and user-friendly. Therefore, you need to use client-side validation to improve your user experience.

When you look at SQL injection, it’s not a method you should rely on. You can delete client-side validation by changing the javascript code loaded into your browser. In addition, it is quite easy to make a basic HTTP call to the backend in a client-server architecture with a setting that causes an SQL injection. Either using tools like postman or curl commands the old-time.

You need to validate server side, ideally as close as possible to the source. In this case you create the SQL query. Everything a client sends you should be considered potentially dangerous. So relying on client-side validation for SQL injection, for this matter, is a terrible idea.

2. Use a database user with restricted privileges

There are different types of SQL injection attacks, as mentioned before. Some of them are more harmful than others. Think about it, say my SQL query is something like "SELECT * FROM USER WHERE USERID = '" + userid +"'". The injection " foo' OR '1'='1 " will provide all the users and is already harmful. However, " '; UPDATE message SET password = 'EVIL” will cause even more problems because the intruder now changed all the entries.

3. Use prepared statements and query parameterization

A lot of languages have built-in features available that help you prevent SQL injection. When writing SQL queries, you can use something like a prepared statement to compile the query. With a prepared statement, we can perform query parameterization. Query parameterization is a technique to create SQL statements dynamically. You create the base query with some placeholders and safely attach the user-given parameters to these placeholders.

When using a real prepared statement and parameterized queries, the database itself actually takes care of the escaping. First, it builds the query execution plan based on the query string with placeholders. In the second step, the (untrusted) parameters are sent to the database. The query plan is already created, so the parameters do not influence that anymore. This prevents injection altogether.

Creating custom code is probably easy. However, mistakes are easily made. To check your code, you might have processes in place like code review and pair programming. However, is the person that reviews your code of pairs with you security savvy. Can that person spot a SQL injection bug in your code? Regardless, it would be nice to automatically examine your custom code for possible security vulnerabilities like SQL injection.
With a SAST (Static Application Security Testing) tool like Snyk Code you can automatically inspect your code for Security vulnerabilities like SQL injection. This can be easily automated in your SDLC by connecting your Git repository to Snyk for instance. 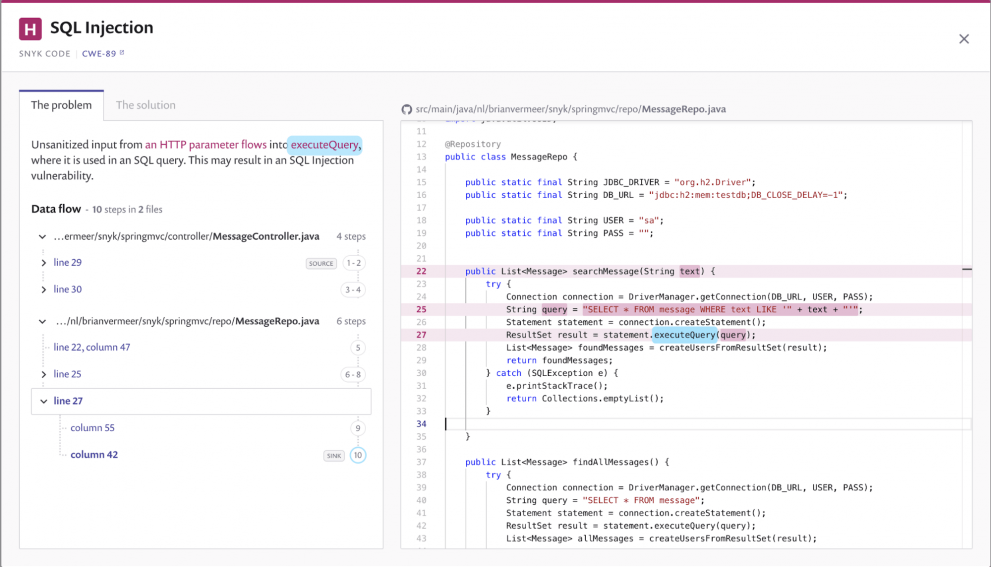 The use of an object-relational mapping (ORM) layer is also something you can consider.  An ORM layer transforms the data from the database into objects and vise-versa. Using an ORM library reduces explicit SQL queries and, therefore, much less vulnerable to SQL injection.

Some great examples of existing ORM libraries are Hibernate for Java and Entity Framework for C#. These languages’ strongly typed nature makes it generally possible to generate the mapping between objects and database tables. This way, you don’t even need to get involved in any SQL queries yourself.

Nevertheless, the problem here exists if you need to create custom queries. Hibernate for Java has its own Hibernate Query Language (HQL). When compiling HQL queries, you should be aware of injection again and use the createQuery() function that works similarly to a prepared statement.

For JavaScript, there are also well-known ORM libraries available like sequelize. With sequelize, you can define how values map to specific types in the database. But let’s face it,In the end an ORM library needs to translate the logic back to SQL statements. So, we trust that these libraries implemented proper escaping of the parameters.

To be sure that your ORM library doesn’t contain SQL injection problems, you should scan them for known vulnerabilities. Using the wrong, outdated version of sequelize or hibernate will still get you into trouble. Using Snyk Open Source to check your project will prevent you from hidden SQL injection in your libraries and many other problems.

I believe this is already familiar to a lot of people, but I will say it once again. Please don’t implement blocklists for your parameters. The blocklist approach sets up a collection of rules that define vulnerable input. If the input meets these rules, then the request gets blocked. However, if the ruling is too weak, then a malicious entry will still be effective. If it is too strong, it will block a valid entry.

We, for instance, block every request that contains the word OR. This might be a reasonable rule, but it turns out that “Or” is a very common Israeli first name in practice. That means that a bunch of my co-workers will be blocked when inserting their names. The same holds for a single quote '. Countless names are containing that character. Think about O’Neill and O’Donnell. But also first names like Dont’a, for example.

Yes, you should do input validation, always! Although prepared statements with query parameterization are the best defense against SQL injection, always create multiple defense layers. Like having limited privileges for a database user, input validation is a great practice to lower your application’s risk in general.
Also, there are situations where prepared statements are not available. Some languages don’t support this mechanism, or older database systems do not allow you to supply the user input as parameters. Input validation is an acceptable alternative in these cases.

Make sure that input validation relies on allow-listing and not blocklisting, as described earlier. Create a rule that describes all allowed patterns with, for instance, a regular expression, or use a well-maintained library for this. Combine this with prepared statements and query parameterization, and you will have solid defense altogether.

8. Be careful with stored procedures

Many people believe that working with stored procedures is a good way to prevent SQL injection. This is not always the case. Similar to SQL queries created in your application, a stored procedure can also be maliciously injected.

So don’t do this in MySQL:

Rather use parameterized queries in your stored procedures: